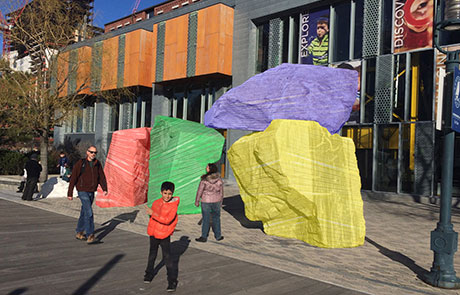 Boston Children’s Museum participates in Fort Point Open Studios this year as we feature wRock wRap by Peter Agoos! Fort Point Arts Community’s Open Studios event features the work of member artists, craftspeople, and designers on view in artists’ studios, in galleries, on the streets, and in the water around Fort Point, October 18-20.

wRock wRap is a playful temporary transformation of the iconic marble giants that sit between Fort Point Channel and the Boston Children’s Museum. The 4 major rocks of this bit of inspired landscaping will take on the primary colors of the BCM logo, using colored transparent industrial cling wrap applied in a continuous layered spiral from the ground up, a completely non-invasive and reversible process that will, after a few days, allow the rocks to return to their usual state. wRock wRap is the work of Fort Point artist Peter Agoos, and would be his third large-scale installation in the area.

The project is made possible through support of The Boston Children’s Museum, a grant from the Fort Point Channel Operations Board with funds from the Chapter 91 Waterways Regulations License #11419 for Russia Wharf, now Atlantic Wharf, and Uline. The Pickup Music Projects (PuMP's) growing collection of musical fences reimagine the form and intent of Paul Matisse's original sculpture, Musical Fence. Built in 1980, Matisse's piece was initially installed on the sidewalks of Central Square, Cambridge, for the public to enjoy. Nearly 40 years later, PuMP has revived this effort, paying homage to his work by building musical fences for installation in public places throughout Greater Boston.

The two fences in front of Boston Children's Museum contain a total of 90 tuned aluminum chimes. Tuned in the key of C major, the chimes sound a melody when rung from left to right, or right to left. Before coming to Boston Children's Museum (the second stop of the tour), the two fences were installed for four months in Cambridge Crossing, Cambridge. The team also has a pair of permanent musical fences along the Mystic River in Macdonald Park, Medford.

The Pickup Music Project (PuMP) takes its name from its initial aim – to make public spaces that allow for impromptu music making, just as public basketball courts allow for pick-up basketball. The team creates the conditions for such social soundmaking by building large, interactive sound sculptures. Because of their design, size, and novelty, their sculptures invite and encourage participation from all musical levels. Experienced musicians enjoy composing for them, just as "non-musicians" enjoy playing them. PuMP has installed their work temporarily at major music festivals and museums, and more permanently in public parks, cities, and campuses.

Funded by the Fund for the Arts, a public art program of the New England Foundation for the Arts.